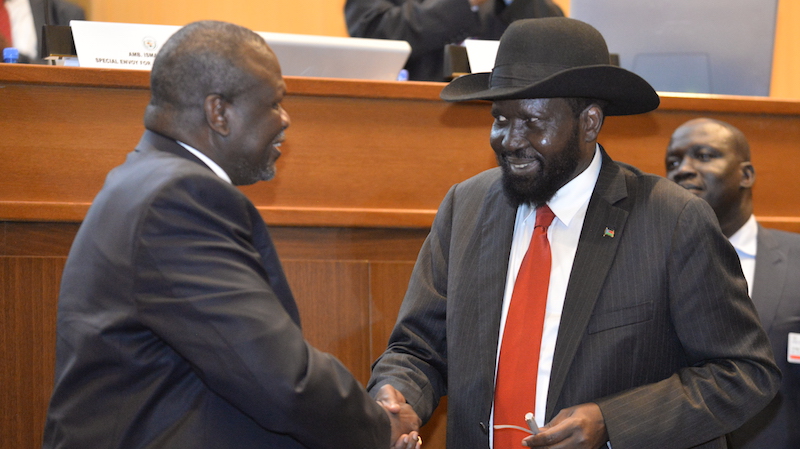 12-09-2018, Addis Ababa, Ethiopia: The Heads of State and Government of the Intergovernmental Authority on Development (IGAD) today witnessed the signing of the final Revitalized Agreement of Resolution of the Conflict South Sudan (R-ARCSS) during the 33rd Extraordinary IGAD Assembly in Addis Ababa, Ethiopia.

In his opening statement, the Chairperson of the IGAD Assembly H.E Dr. Abiy Ahmed congratulated the parties and lauded their commitment to peace, stability and development of the South Sudan. Noting the wind of change of sweeping the Horn of Africa, he emphasized the need for the South Sudan parties to implement the signed agreement in good faith in order to achieve long lasting peace in South Sudan and set a sound base for harnessing the recent regional magnificent efforts towards regional peace and stability.

H.E Ahmed commended IGAD and all the parties in the continued effort and commitment to bringing peace to not only South Sudan but the rest of the IGAD region which will result into the consolidation of the gains made in pursuing the IGAD regional economic integration agenda.

Encouraging the parties to the Revitalized – Agreement on the Resolution of the Conflict in the South Sudan (R-ARCSS) to give peace a chance, Chairperson concluded that through the implementation of the agreement Africa will show case its ability to overcome conflicts through reconciliation and shared interest for economic integration.

H.E Amb (Eng) Mahboub Maalim the Executive Secretary of IGAD in his welcoming remarks requested the Republic of South Sudan to embrace regional peace and integration and build on the momentum created by the wave of the recent peace initiatives in the IGAD region.

The IGAD Special Envoy to South Sudan H. E. Dr. Ismail Wais in his report to the summit appreciated the support extended by the IGAD Member states and noted the particular inputs of Presidents Omar el Bashir, Dr. Abiy Ahmed, President Museveni. He reported that the negotiations were complete, with the parties ready to sign the peace agreement.

The out-going chairperson of JMEC; Mr. Festus Mogae’s efforts were recognized with a token of appreciation handed over by H.E Abiy Ahmed, Amb. Maalim and Am Wais. In his speech, thanked IGAD and the South Sudan government for having entrusted him with a key role that has sought fruits ushered hope that this time the parties will implement the signed agreement for great success and benefit to the people of South Sudan.

Other statements made by representatives from the United Nations Secretary General’s office; European Union; IGAD Partners Forum; TROIKA, China and African Union Commission all reiterated the need for commitment by all parties for a new chapter and opportunity for South Sudan and counseled the parties against the dangers of not implementing the agreement. They also committed to support the parties efforts to implement the agreement.

The Heads of State and Government Assembly was preceded by the 65th Extra-Ordinary IGAD Council of Ministers Session.

The mandate of the CTSAMM is to monitor and verify the implementation of the Agreement on the Cessation of Hostilities (ACoH) as agreed by the Parties and thus help bring an end to the conflict and its devastating consequences: great loss of life, the displacement of millions of people and destruction of property and livelihoods.